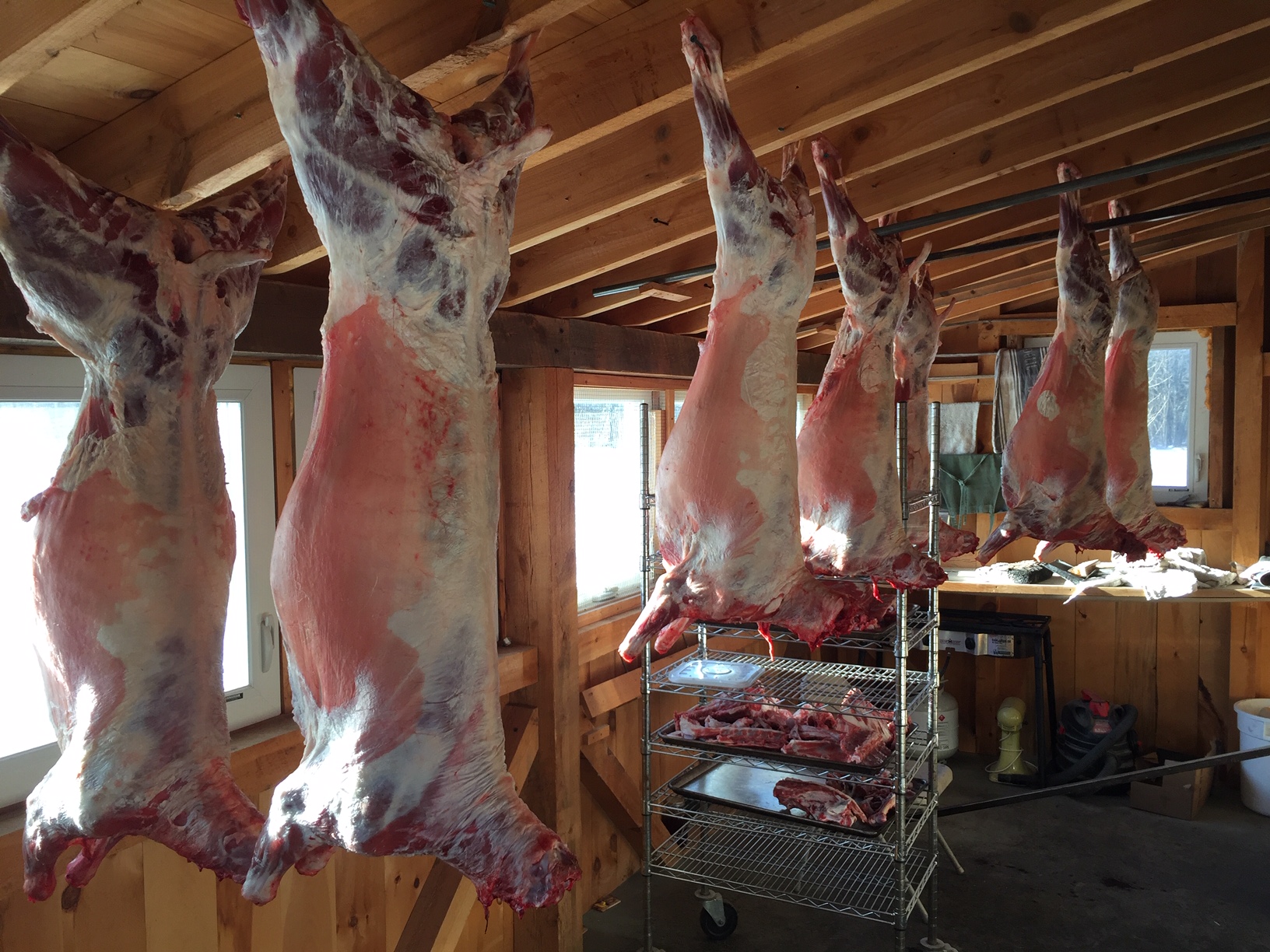 Twenty ewes graze beside the narrow path from the house. Glenys – the matriarch of the flock – walks to my side and lowers her head for me to scratch between her shoulder blades. The flock is calm and quiet this evening in a way I have not seen in months. As in years past, Glenys raised the largest lambs – one son and one daughter. While her son’s body now hangs to cool, her daughter is one of the seven promising ewe lambs chosen to join their mothers and aunts in the work of growing and birthing and mothering. Gathered in by the older ewes, it seems the young ones have quieted and turned their attention inward, toward the new life that now grows inside of them. As the grasses turn summer sunlight and rainfall into sugar, so the ewes turn this sweet grass into milk and meat. Over the past days we have undertaken the solemn and ancient work of wedding human life to this miracle of Sun and Rain and Grass and Flesh. We remember what it means to be indebted for the privilege of breath, and we wonder how to speak to the depths of a gratitude that includes work-clothes stained with blood and manure. It is a messy thing to draw close to Life, for you find that Death also resides there.

As a reminder, we will be closed this Saturday as we continue our butchering work, but we will host a Work Day on Sunday 12/27 from 11am – 1pm, including Soup Prep. Find details HERE. We look forward to seeing you at our next Distribution on Saturday January 2nd.

Last week the Stand was a remarkable place to be alive. Almost 300 loaves of bread and 60 quarts of soup left in your arms and baskets and bags, headed to neighbors and friends and family. Your words and notes and gifts have lent a warmth to our days. We are grateful to be in this with you – and to know that you are in this with us. Your remarkably generous gifts last week ($2344) have already brought us to within $670 or our December budget request. In the spirit of full transparency, here is what we would like to do if your financial gifts exceed our budget request this month. We plan to start a SCYTHE FUND. Read the newsletter on scything HERE. These beautiful tools allow us to make hay without the use of diesel fuel and tractors, furthering our mission to extend reparations to the more-than-human world. With a collection of 15-20 scythes, we could offer clinics and training next spring for the many folks who have expressed interest in learning this old craft. Scythes run $200 each, and so each gift of $200 beyond our December budget will buy a scythe toward this beautiful possibility. Thank you for considering. You can make a gift HERE.

I was asked to speak last week to a group of Vermont legislators, to describe what it is that we are doing here at Brush Brook Community Farm. Here is what I came up with, my attempt to tell the story of this remarkable place.

My name is Adam Wilson from Brush Brook Community Farm, an Agricultural Gift Economy in Huntington. I will try my best to offer a few words here that might be of service. Shortly before she died, our neighbor, friend and elder Enid Wonacott attended our first Gratitude Feast, a dinner served family-style at the Town Hall, offered as a gift to anyone who was hungry for any reason. A hundred people arrived to share roasted lamb, vegetables and apple pie all grown right there in the neighborhood. Enid called me over after the meal and said, “Adam, this was really great, but it would be better with a dance afterwards.” It wasn’t until after Enid’s death that I understood what she was saying to me. Don’t forget that agriculture has the word culture in it. Tend to the culture with as much care as you would the soil under your feet. Perhaps it IS the soil under your feet.

On her bookshelf, Enid kept a well-worn collection of Wendell Berry. Here’s how farmer-poet Wendell describes what becomes of us and our agriculture and our home places as the culture begins to die. He writes, “We seem to have forgotten that there might be, or that there ever were, mutually sustaining relationships between resident humans and their home places…[In] the absence of such relationships…we have become the willing parasites of any and every place, destroying the source and substance of our lives, as parasites invariably do.” - The Art of Loading Brush, 2017.

Wowzers. Honesty can be hard on hope these days. I hear your reply now, “But we live in a state with a thriving local food scene.” Well, here’s another story. A well-respected organic vegetable farmer told me that it took seven calories of inputs to produce one calorie of food on his farm. He was utterly heartbroken about this. These inputs included plastics, diesel fuel, trucked-in organic matter, fertilizers, seeds from elsewhere and so on and so on. So how does one describe the state of local agriculture once you learn that there isn’t much ‘localness’ in the food we proudly use the word to describe? It was just a week later that I read those words, “we have become the willing parasites of any and every place.”

Now this was high summer, when farmers are worn thin to near breaking. Broken bodies, broken home places, and broken hearts. Here’s a way to say it plain: Local farms are asked to participate in a market that eats farmers alive and spits them and their ideals out with as much efficiency as it does soil, air and diesel fuel. When no one tends to the culture you might wake up one day and realize that you no longer have one.

A few months later, utterly heartbroken, we set the tables for that first Gratitude Feast. We decided dinner would be served family-style rather than as a buffet. We wanted to make sure everyone who showed up got something to eat. Here’s what we noticed: Sitting around a table with neighbors and strangers, people were more than willing to limit the amount they put on their plate to ensure everyone got some. And they did so joyfully. Having seen this, we allowed ourselves to dream of a small town that began to wean itself from the all-you-can-eat-buffet-line of global industrialism. In this town, people found that growing food by hand took a lot of time, but that in fact they had much more time than they imagined once they turned off their computers and their phones. As they looked around, they found a generous allotment of sunshine and rain that fell on relatively fertile soils. There was even some unused, open land, so they began to graze cows and sheep on these abandoned fields. They found wild foods like ramps and nettles. They found ground-fallen apples, and unwanted garden squashes and herbs. Every week many people showed up to turn these foods into a huge pot of soup that was then offered as a gift to anyone who was hungry for any reason. They asked this same ‘anyone’ to help to cover the costs for things that still needed to be purchased with money. And then one day we woke up and realized that we were no longer dreaming, that a group of neighbors had begun, however imperfectly, to interact with their home place as if it was their home, as if they were part of a household that included other humans as well as soils, plants, animals and so on. In fact, they found joy in limiting themselves to ensure there was something to eat for each of their human and non-human neighbors. And even in a time of enforced isolation, it seemed that they were dancing and singing Enid’s song. They were making culture with their masks on.

Many thanks for reading.

BUDGET UPDATE: Thank you for considering the December Budget