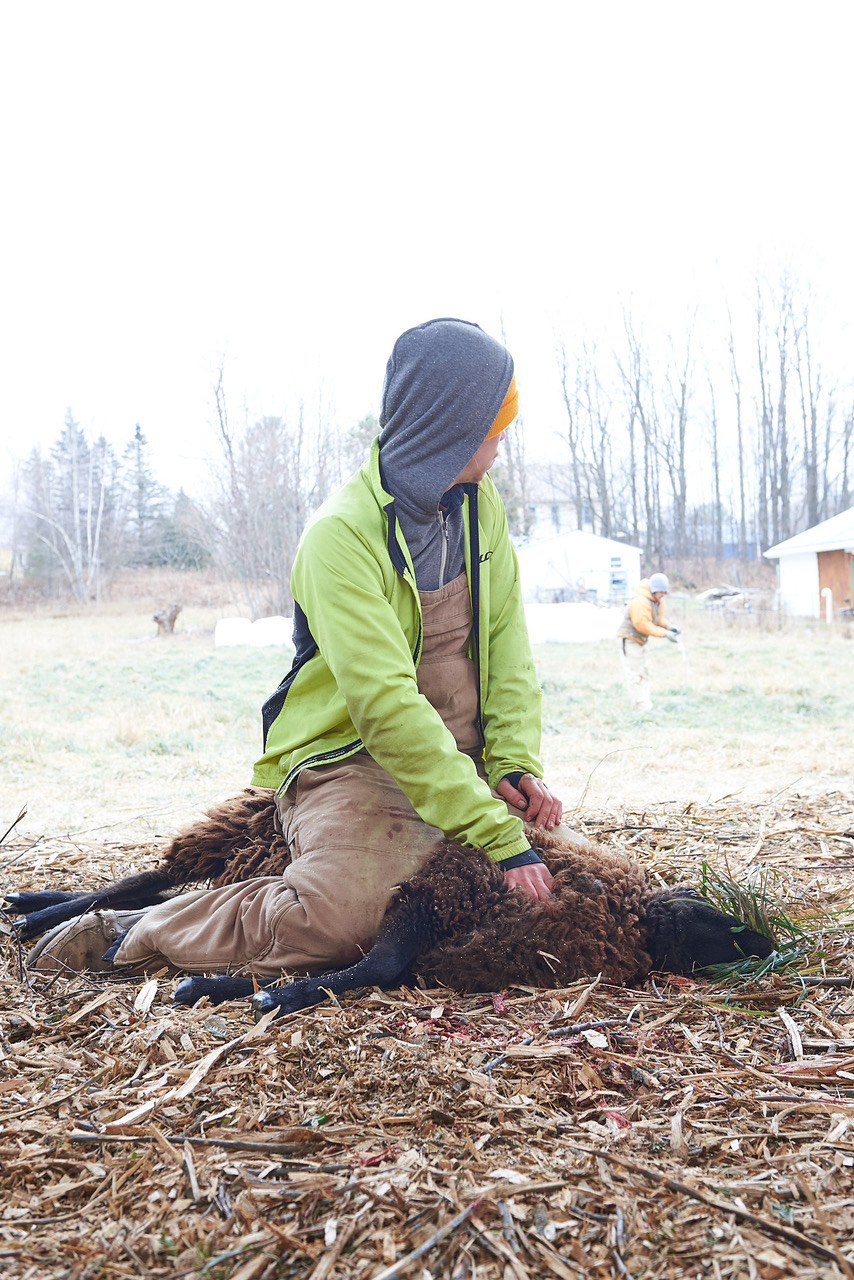 Collin’s left hand is wrapped in a dish towels to stop the bleeding when we are called in to see the receiving nurse at the Urgent Care Center. It’s a knife wound, and stitches will be required. When she asks how it happened, Collin replies, “I was slaughtering Lambs.” A bit wide-eyed, she admits, “I don’t know if I could do that job.” And then, as she scrolls down the screen, filling boxes on the form, she says, “Would it be accurate to write that you were butchering lambs?” I reply, “No, the butchering work begins after the carcass has been hung and cooled. Slaughtering is the proper word for ending the life of the animal. The word for killing.”

Here is a this week’s invitation:

November Budget Request: Thanks to all who responded to last week’s plea by sending in financial gifts. With $712 coming in last week, there is still $1886 remaining with just 13 days left in the month. If you are willing to make a financial gift, you can do so HERE.

Just three days prior we brought the Flock home and sorted out the first slaughter group – twenty animals in total. We called the shearer so that the fleeces could be saved for yarn. Two kindergarten classes from the nearby Elementary School walked over to visit the Sheep during the shearing. Teachers and parent-volunteers acted as shepherds for the groups of young children. These adults – tasked with providing direction for the young ones – each asked some version of the question, “Why are these Sheep being shorn?” and heard in reply some version of, “We will begin slaughtering them tomorrow.” Each time we said the word slaughtering we heard, “We’ll just skip right over that subject now won’t we.” The instruction in their tone was clear: please omit the killing and the dying. There is a lot to contend with here. And we have been in the thick of slaughtering for the past few days and so the work is heavy on our minds and hearts, staining the knees of our work clothes. It is common these days to describe a ‘disconnect’ between people who eat food and the Farms and Farmers who do the work of procuring that food from a living landscape. Disconnect may accurately describe the conditions, but I do wonder if the word is a bit too passive to tell the whole story. I wonder how I might take responsibility for a more active refusal to be connected. I remember back to my school days, how important it was for the teachers to mark each student either “in attendance,” or “absent.” The significance of this daily ritual seems to say something about the relationship between learning and contact, between learning and attendance.

These words may strike you as inappropriate, the brutal honesty disturbing. This is what I mean by the word ‘refusal’ – a widespread and largely unquestioned unwillingness to attend the sites and scenes of our own consequence. A refusal to bear witness to the everyday taking that underwrites our modernizing lives. I see this refusal in myself as I type this morning on this laptop. Could I bear the sight of the factories and the mines, the shipping yards and the corporate boardrooms – the sites of social and ecological violence – that are brought into being by my employment of this technology? Or does the whole thing only continue if I remain absent from those places? There are many alarming statistics about the current state of ecological collapse. One that caught my eye recently was this: Researchers found that, between 1970 and 2016 worldwide populations of mammals, birds, reptiles and amphibians decreased by an estimated 68%. In a generation and a half, more than two-thirds of non-human vertebrate life was extinguished. During roughly the same period, as James Rebanks describes in his recent book on the loss of diversified small farms, “The share of the average American citizen’s income spent on food has declined from about 22 percent in 1950 to about 6.4 percent today. But it is worse than that, because the proportion of every dollar spent on food that goes to the farmer has declined massively to around 15 cents and is still declining (Pastoral Song, 2020).”

Middle-class-ness and the economic growth it makes possible are built from these intertwined declines. After a prolonged absence from the places where food is grown and harvested (read: killed), visiting a Farm can prove quite disturbing. I’ve had some potent opportunities to be disturbed in this way over the years. As a young, idealistic farming student in California I visited commercial Lettuce fields and spoke with the migrant workers as they tried to keep pace with the twenty-foot long conveyer moving over the neatly sprayed rows. Nothing really lived there in those fields, which covered the fog-draped landscape as far as the eye could see. Where did the native wildlife go? The native humans? Less than a decade later, as a beginning beef farmer, I suddenly found myself unloading animals born and raised on the Farm into holding pens at commercial slaughterhouses in VT and NY and realized that in order to legally sell meat I had to turn my back on the terror in their eyes as I forced them to live out their final hours in a place they knew not. At some point I began to see that there wasn’t a lick of difference between the Lettuce field and the slaughterhouse. As Rebanks describes, these landscapes of violence – and the farmers who labor there on our behalf – are created in the supermarkets. By a demand for disconnection.

But there must be a difference between killing and violence. Or, at least, such is our longing – to experience the sense of relatedness that humans must have felt when they lived, as Professor Kim Tallbear describes, in “mutually sustaining societies with non-humans.” (Link HERE)

Collin has taken on the role of lead shepherd this summer. When it comes time to write up the slaughter list, Erik and I defer to Collin, who begins that process by reading back through their summer journal of Sheep care. Let me pause for a moment to say that I have never seen a depth of love quite like the one Collin carries for the Sheep. This summer the Sheep had a lot of trouble with sore feet, a bacterial hoof scald that causes pain and lameness. Other sheep farmers have told us – if you don’t cull the animals who are prone to this lameness you will spend the rest of your life cleaning and treating sheep feet. Wolf would do this work in the wild – by eating the slow and the limping first. As will we this winter. Betty-Lou is a remarkable ewe, but after reading through the journal, Collin notes that she’s had one of the highest recurrences of hoof troubles. Betty-Lou moves onto the slaughter list, along with her daughter from this spring, who likely carries those traits. The way Collin talks about Betty-Lou, I know this isn’t going to be easy. We’ve said our many thanks, sung our songs, and are well into our first slaughter day when I hear Collin say, “I’m going to kill Betty-Lou now.” Here we are, humans alongside our sheep, stumbling and fumbling to remember what our ancestors must have learned and re-learned by their close-up ways of living – that death feeds life. Pick up a handful of soil and ask yourself what made it so fertile and you might begin to see it too. This image comes from one of my teachers, Stephen Jenkinson. A compelling idea, for sure, but here in the barn where we are slaughtering Sheep I wonder if it is still just an idea: The blood-soaked hay from these slaughtering days will make rich compost that will feed the soils that will feed the grasses that will nourish the lambs not-yet born to the Ewes we decide to keep alive. I hear the sobs before I can turn away from my work to look over. Betty-Lou is dying. Collin straddles her, hand on her face, weeping. “I will miss you so much, beautiful Betty-Lou.” Collin’s tears are falling onto the skin of the dying Ewe. Thank goodness someone is weeping, I think. Thank goodness someone is weeping.

BUDGET UPDATE: Thank you for considering the November Budget