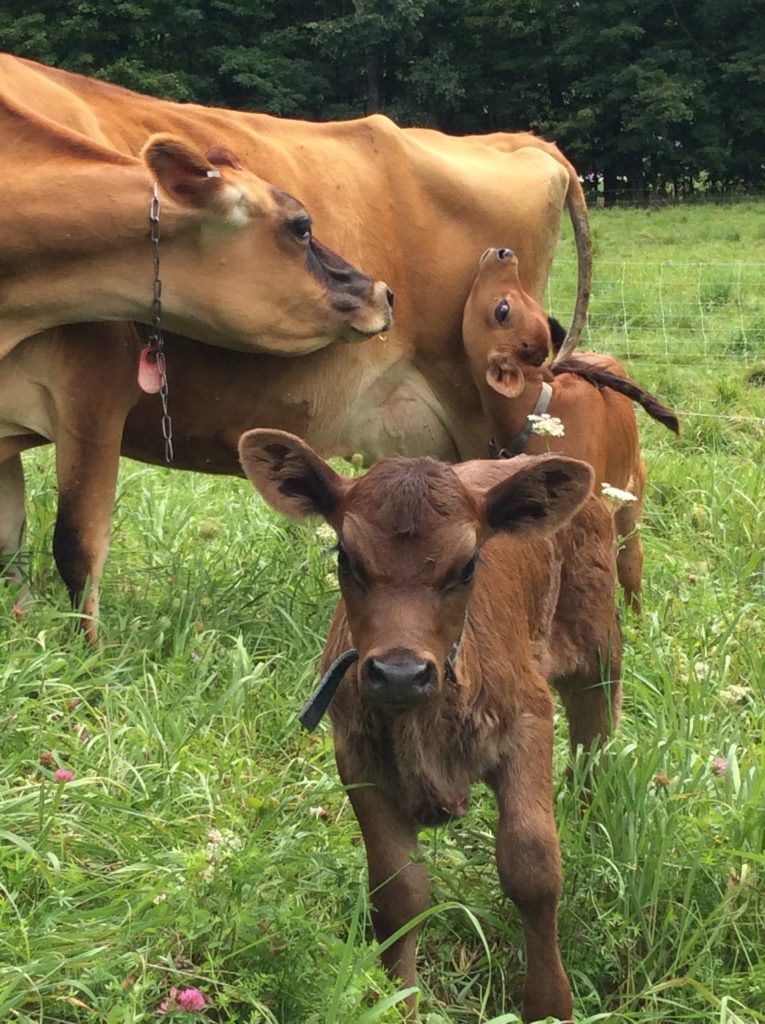 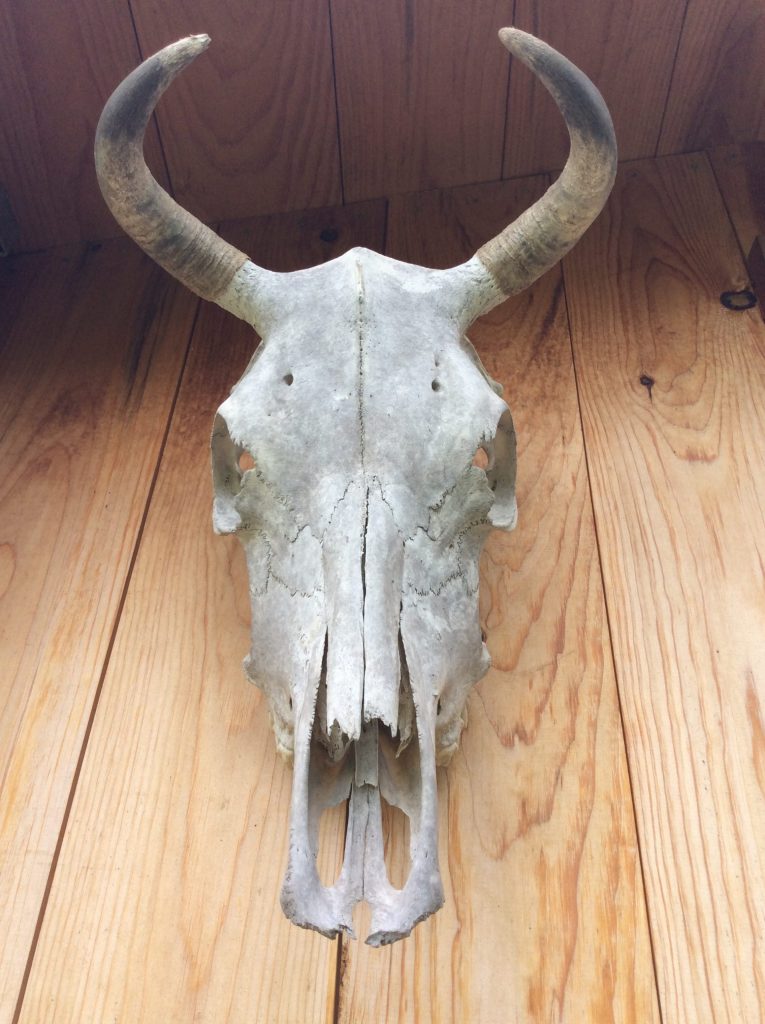 We welcomed Nell to the Farm last week.  At three days old, she cautiously found her way to her feet after a ferry ride swaddled in the back of the Farm hatchback.  Nell joins Josie and Johnny as, respectively, adopted daughter and sibling.  Nell is granddaughter to Nellie, early teacher to me as I found my way into the complex responsibilities of husbandry two decades ago.  Nellie’s skull now watches over and guards the bakery threshold, and the return of her matriarchal lineage to the Farm is a source of great Joy for those of us who knew her and for those who have known her tremendous daughter – Nell’s mother – Natalie.

We are thrilled to invite you to join us this Friday 9/4 for Soup and Bread Gift Distribution.  The Stand was a lively, joy-filled place last week and several on the Farm Team described a lingering after-glow.  They couldn’t stop smiling!  It is you who show up each week who bring this magic with you, and we thank you very much.  Your miraculously generous financial Gifts surpassed our remaining budget request by $70, which is carried over as a positive starting balance for this month.

Writing last week’s Letter was a bit like giving birth.  I say this because I have witnessed the act many times among the Sheep and Cows.  Speaking honesty can be like this.  Telling Untold Stories in a troubled time can be like this.  And so, in solidarity with those in the streets pleading for Reckoning and courageously telling Untold Stories, I will offer some humble thoughts.  This Letter asks for some endurance – it is longer, yes, but also the words may tug uncomfortably on the heart.  Proceed with this caution in hand.

Some who read last week’s Letter asked me to describe my use of the word Reparations in the context of the work of Brush Brook Community Farm to give away carefully grown local food as a gift to anyone who is hungry for any reason.  This I will try to do, knowing full-well the risks of wading into this fraught territory.  Here is a question to consider:  In a society carrying stories of Judgement, Punishment and Needing to be Good how can we even begin to take responsibility for the unintended consequences of our lives as they now come thundering into view?  With this in mind, I suggest we take the red-hot firebrand of Guilt and plunge it into the cool waters of Grief.  This reckoning could find a proper home in the cold and long-silent Great Hall of Grief.  We have lit a fire there, and invite you to gather ‘round with us.  Let’s see if we can warm the place up together.

Stumbling Towards Reparations:  An Untold Story of America

(This story is an excerpt from the Virus, the Dragon and the Gift, an essay originally published and still available in its entirety at www.runningstonebread.com)

There is a mythic quality to the changes that have swept across North America in the past months.  The Virus’ advance has been forecasted like a great Storm, shuttering store-fronts and grounding planes, people scattering and seeking what shelter they can find ahead of the anticipated leading edge of infection.

But there is another mythic story that begs to be told.  It is the story of another great Virus, that, in its day, approached like a hurricane making landfall from the Atlantic.  That virus was called Small Pox.  It was carried ashore by the pale-skinned people of the boats, and as it swept from East to West, it claimed the lives of some ninety percent of those who called this land home.  Worse yet, some in positions of leadership at the time ordered the distribution of blankets from the dying and the dead to further spread the contagion.  With centuries-old lineages of indigenous caretaking culture now in scattered disarray, the Great, Wild Wealth of the continent was opened to a never-before-seen brand of bloodthirsty extraction.  Old-growth forests were clear-cut and floated as rolling rafts down New England’s rivers toward the great urban centers forming rapidly near their mouths.  Great runs of Atlantic Salmon that once roiled these same rivers were fished, dammed and polluted to extinction.  Beaver, Mink, Otter and others were rapaciously trapped and skinned and sold to the highest bidder.  To the West, herds of Bison that once blackened the horizon for days as they passed were gunned down with remarkable efficiency.  Cleared land was plowed and planted cash crops, but a shortage of labor inspired the creation of a state-sanctioned system of forced labor called chattel slavery.  Immigrants from Europe, many whose ancestors had themselves been enslaved by other Europeans, gave up their distinct regional identities to become ‘white’ and willingly participated in stealing the humanity of millions brought over at gunpoint from Africa.  With so much available fuel, the Economy grew at a pace never before thought possible.  Remaining pockets of Indigenous People, obstacles to the white-man’s unquenchable thirst for more, were removed to reservations, murdered, and subjected to forced sterilizations and abortions.  Before long, sailing ships and horse-drawn wagons were replaced by trains, planes, tankers and automobiles, and all corners of the globe were opened to extraction.  Colonization, the earlier name for the project, was revolutionized out of fashion, as it carried too many troubling memories of now-morally-reprehensible tactics.  Globalization became the new name for this inevitably progressing Progress.  Economic Growth became another.  Many good people unwittingly accepted the new name and job description assigned to them – Consumer.  Still there seemed to be obstacles.  Global Warming was identified, described and soon declared the most confounding of all, and for decades the affluent of many countries discussed the problem, looked at projections, considered limits, and generally scratched their heads.  Progress continued inevitably progressing, as did the concentration of problematic gasses in the atmosphere, the mass extinction of birds, fish, insects, mammals and plants and the ruination of countless human lives to feed the engines of growth.  Enter another Virus.  In a matter of weeks, a tiny, invisible burglar hitched a ride on the global express network, snuck its silent way into the great Halls of Progress, and, with remarkable efficacy, brought the whole project to its knees.  Some mistook this turn of events as a punishment for the excesses of humanity, but the Virus seemed to have no such motive.

Such is the moment where we find ourselves.  Unprecedented.  Unexpected.  Ripe for Reckoning. Pleading for Remembering.  This is what myth asks of us, to remember the stories of the past as a way to inhabit the present.  But where does the story go from here?   At Brush Brook Community Farm, we have articulated our mission, perhaps boldly, in these words:

We aspire to extend reparations to the more-than-human world by amending our relationships – both human to human and human to all that is not human.  This careful, relational work is by definition local, because we cannot repair what we cannot look in the eyes.

Thank you for reading.

Here is what you will find in this letter:

Please bring a pint or quart container with you from home and we will fill it for you.

Would you consider coming by for bread and soup for your household, and/or some to drop off to a neighbor on your way home?

BUDGET UPDATE:  Thank you for Considering the September Budget

Many heartfelt thanks to all who have responded to these invitations by sending in Financial Gifts.  If you would like to support our work, you can mail checks made out to Brush Brook Community Farm to PO Box 202, Huntington, VT, 05462, bring gifts to the Friday Gift Stand, or donate through the website.  We are 100% financially supported by these personal financial gifts.